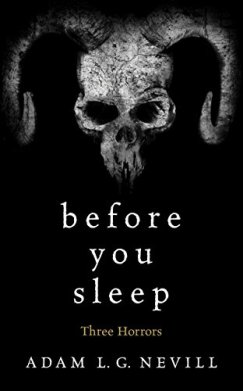 It’s been a heck of a while since I did one of these, but I have got an urge to read a few more shorts, so thought I’d crack a few more Short Read Sundays out. This week’s instalment comes to us in the form of a short story collection (with three shorts in it).

A trilogy of horror stories from the award-winning writer’s first collection of short stories – SOME WILL NOT SLEEP – and an introduction to the nightmarish visions and ghastly spectres that have been disturbing the sleep of readers for years. In this book you’ll find two ghost stories and a tale of ancestral demoniac horror.

First things first; the cover is eye-catching and, in a horrory way, utterly gorgeous. I didn’t buy it because of the cover (buy is a loose word as it was free on Amazon when I downloaded it) but the cover drew me in like a fish on a hook. I wanted something scary/unsettling and the cover did it’s level-best to promise me that.

The first story, ‘Where Angels Come In’, was well written and was set in the point of view of a child as a couple of kids went to try and bring back something from a haunted house to say they had been brave enough to be there. I won’t go much more into the tale than that as, with it being a short story, I run the risk of huge spoilers. What I will say is that the tale itself was well-written, the pacing was great and had my curiosity really going along with the tale as I read. In fact, I thought it was pretty great up until the last page or so. The ending really fell flat for me as I was hoping for some big explanation but I was left with quite literally nothing.

The second story ‘Ancestors’ was probably my favourite of the three purely because I thought the ending was pretty darn awesome (something I genuinely felt the other two lacked badly). This story, also from the view of a child, focused on the things that ‘came out to play’ at night inside the child’s home. All throughout it’s a fairly creepy tale and the ending quite literally makes this particular short story a 5 star read all on it’s own. My only draw back from this was that it took me a while to get settled. the writing style felt different, slightly zanier than the first story.

The third story, ‘Florrie’, genuinely had me thinking it was going to be my favourite. The writing in this one was leagues above the other two. Much like I said before, it had a distinctly different style, almost like all three were written by different authors. In actual fact, he just did a darn good job of getting the character’s character over in the short stories. Back to ‘Florrie’. It tells the tale of a man moving into a house formerly owned by an old lady named (you guessed it) Florrie. So much in this story is awesome. It had a few creepy moments and the whole premise of the story, almost akin to possession but probably more along the lines of suggestion, is just downright unsettling. It’s the kind of slow-burn haunting that could happen to anybody. Sadly, unlike the rest of the story, the ending falls flat. Not even flat in a way you can be content with. It just makes you say ‘what the hell was that?’ Genuinely felt like the author wrote himself in a corner and did the Stephen King trick of just throwing the most random thing that comes to mind to make an ending.

Ordinarily, I’d say a likening to Stephen King is high praise. But anyone who has read Under the Dome will know his endings often leave something to be desired. That being said, I still really enjoyed the collection. The writing quality and stories being told were good enough not to make me give it a low mark and certainly good enough to make me overlook the lacklustre/bizarre endings of two of the three tales on offer.