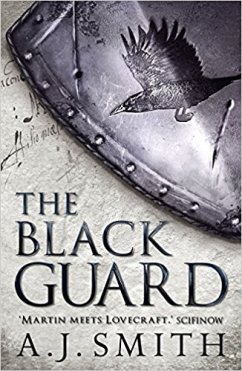 The city of Ro Canarn burns. With their father’s blood fresh upon the headsman’s sword, Lord Bromvy and Lady Bronwyn, the last scions of the house of Canarn, face fugitive exile or death.
In the court of Ro Tiris, men fear to speak their minds. The Army of the Red marches upon the North. Strange accidents befall those who dare question the King’s new advisors. Those foolish enough to speak their names call them the Seven Sisters: witches of the fire god; each as beautiful and as dangerous as a flame.
And, called from the long ages of deep time by war and sacrifice, the children of a dead god are waking with a pitiless cry.
All that was dead will rise.
All that now lives will fall…

I have read numerous reviews on Black Guard and they have told me one thing; that opinions are as different as flakes of snow. Many have said the characters were wooden and 2D, I thought quite the opposite. Even the ones that got themselves killed off, I felt had a lot about them. People have said that the world isn’t well-built, many have disagreed saying it feels very complete. I am one of those that feels it felt quite complete. I thought the author did an excellent job of immersing me into the world of the Long War Chronicles.

I did, however, feel that Black Guard was guilty of trying too hard to begin with. It felt like the author was trying to tell a lot without actually showing us very much. I mean, you hear about all these cool things happening but we always seem to get to the action just after the action has happened.

In book one anyway. Book two seems to address that annoying habit and actually throws us into the thick of battles both on land and sea. Looking back, I feel book one was written as it was to almost ‘set the scene’ much like Stephen King does with his books. Slow-burn to make you feel one with the universe you’re reading and then the tempo picks up.

Another downside to book one is the fact that there are so many different POV characters (This is my biggest annoyance) that when you get attached to one you may not see him or her until the end of book one or even book two. People you get attached to also have a habit of getting themselves killed in sudden and less than glorious ways. That, at least, makes it more realistic. Death doesn’t always take us in a blaze of glory. Sometimes we just go out with a whimper.

Going back to book one and two, in many ways it feels like they are totally different works. The second just feels leagues above the first. That’s not to say book one wasn’t enjoyable, just that it wasn’t AS enjoyable. The characters seem to come alive more near the end of book one and leading into book two. Magnus, Rham Jas and others of the Ranen contingent are particular favourites of mine. I did feel, however, that regarding character, the author was guilty of killing some off that seemed of far more worth/value to the story than some he chose to leave alive. Left me scratching my head a little bit.

I did, however, love the variety of races (the Risen Men and the Ranen intriguing me the most). I think the religious sects are done very well and promise a fair amount of interest going forward. In fact, the whole mythos that the Long War is based on down to it’s starting point is incredibly intriguing. I genuinely can’t wait to get stuck into the next book. I just hope A.J. Smith lessens the amount of POV characters. If he does that and keeps up the strong writing he’ll get perfect marks from me next time.