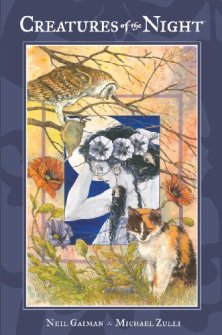 In ‘The Price’ a beguiling black cat makes a new home for itself at a rural house, delighting its owners until the cat begins to show signs of vicious attacks night after night. Confounded by his wounds and concerned for their new friend, the cat’s human companions are unaware that their quiet county house is not as safe as it seems.

‘The Daughter of Owls’ recounts an eerie historical tale of a baby girl who is found abandoned on the steps of Dymston Church. Sequestered behind the walls of a convent for the next fourteen years, the strange girl inspires tragedy when word of her uncanny beauty spreads to the neighbouring villagers.

Both of the these stories first appeared in Gaiman’s collection ‘Smoke and Mirrors’ and have since received the graphic novel treatment. I haven’t read the collection, so went into this one with a clean slate as far as knowledge went on the subject matter. This, much like my previous graphic novel review, is another one of my library finds.

‘The Price’ to me, was by far the stronger of the two stories. You can feel Gaiman’s voice coming through the narrative, literally to the point where I was reading it in his voice in my head. The whole idea behind ‘The Price’ is a wonderful one and, mixed with the rugged strokes of the artist, the best word to describe the piece as a whole is ‘charming’. It was one of those stories that, upon finishing, I just found myself feeling perfectly satisfied and even happy with what I had just read.

So much so that I didn’t quite want it to end.

‘Daughter of Owls’ had me feeling somewhat uncaring about the whole thing. I didn’t feel a connection to the piece, perhaps because it is an old story being re-told by a couple of gents at their club over drinks and cigarettes. I just didn’t feel enthused with the tale, despite the fact that it wasn’t too bad a read. The one thing it did have going for it was the fact that it was written in nice, flowing handwriting, due to the person being told the story writing it up for use in one of his own story collections.

All in all, I would have given this five out five if ‘Daughter of Owls’ had been replaced with something as charming and captivating as ‘The Price’. The three star score is literally just for ‘The Price’.