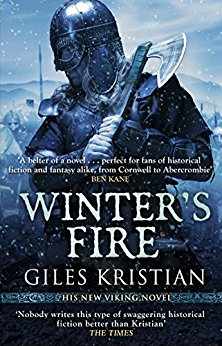 Norway, AD 785 – a vow of vengeance must be kept . . .
Sigurd Haraldarson has proved himself a great warrior . . . and a dangerous enemy.
He has gone a long way towards avenging the murder of his family. And yet the oath-breaker King Gorm, who betrayed Sigurd’s father, still lives. And so long as he draws breath, the scales remain unbalanced.
The sacred vow to avenge his family burns in Sigurd’s veins, but he must be patient and bide his time. He knows that he and his band of warriors are not yet strong enough to confront the treacherous king. They need silver, they need more spear-brothers to rally to the young Viking’s banner – but more than these, they need to win fame upon the battlefield.
And so the fellowship venture west, to Sweden, to fight as mercenaries. And it is there – in the face of betrayal and bloodshed, on a journey that will take him all too close to the halls of Valhalla – that Sigurd’s destiny will be forged. There, in the inferno of winter’s fire . . .

Thank you to the author, Giles Kristian, who kindly sent me a signed copy around Christmas time. Much appreciated!

Winter’s Fire, the second book in Gile’s Kristian’s ‘The Rise of Sigurd’ series continues on with Sigurd Haraldarson’s quest for vengeance against the treacherous King Gorm. Sigurd And his warband (numbering no more than a half-crew at most) soon realise that in order to gain the vengeance they seek, they must first survive and grow stronger for no man can challenge a king with only half a crew. And, more importantly for Sigurd, he can’t pay that half-crew unless he gets his hands on some riches. With that in mind, Sigurd takes his men west where they can sell themselves as swordsmen and fight for the coin they will need to raise an army to fight King Gorm.

Kristian’s writing style is a perfect fit for the dark, dreary time of the Vikings. His descriptive qualities are second to none in historical fiction as far as I have read and they really seem to give the battles a new dimension. His character work is wonderful and the voice with which he writes is flawless. Historical Fiction has always been something I have enjoyed, but Kristian’s writing has made it perhaps my favourite genre by quite some way. That being said, the fact that he has another Viking trilogy, a series on the English Civil War and an Arthurian novel coming out excites me greatly.

The core cast of characters is, obviously, the same as the first book and their camaraderie just seems to grow with every passing chapter to the point where you feel you’d have loved to have had the chance to meet (certainly not fight) these fictional men and women.

In Winter’s Fire, Sigurd has to make hard decisions and he brings the reader along with every agonising moment of said decision making. So much so that you feel at one with him as a character rather than just reading the thoughts of some man between the pages of your book.

The final book in the Rise of Sigurd trilogy (The Wings of the Storm) is sat on my book case glaring daggers (or, perhaps more aptly, axes) at me knowing that it is going to be a good while before I get a chance to crack it open.