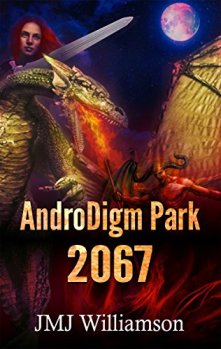 A sci-fi thriller set in the near future — a dark, hedonistic world controlled by giant cyber and media corporations.

When the CEO of the world’s largest android manufacturer is brutally murdered, Marshal Shelby is tasked with hunting down her assassins. His investigation leads him to AndroDigm Park — a fantasy park for the super rich, where quests can act out their fantasies in a world populated with android creatures and human replicants. If you’re rich enough, anything is possible — travel back in time to the days of Camelot, ride dragons, slay demons, or engage in any kind of debauchery you desire. But is there something more sinister about the park? And why was the park’s inventor, the CEO of AndroDigm, murdered?

This novel was provided to me for free by the author in exchange for an honest review.

Androdigm Park was a novel that, when offered to me for review by the author, I got very excited due to the concept. I’d been thinking to myself how I hadn’t had the chance to get stuck into sci-fi for a good while and when this came along it fit the bill. Sadly, it came along a few weeks before I got incredibly busy with work for several theatre tours and the Edinburgh Fringe Festival. So my reading time has been incredibly scarce. Apologies to the author for that.

But … I finally got around to reading stuff that was on the backburner:

Androdigm park starts out at a fairly fast pace with action never too far away. Add that in to a gruesome murder by radical activists and one man’s mission to hunt down the assassins and you have the reader hooked fairly quickly.

The writing flowed well for the most part and didn’t feel rushed. I did feel, however, that for large parts of the novel the description and emotion that I expected simply wasn’t there. For instance there is a part (quite an important part) where a flyer crashed into a building. It didn’t get much description other than a flyer crashed into a building. This was a fairly frequent thing (not the explosions, the lack of emotive description) and, as a reader, I failed to feel engaged or even too bothered about the parts the author would have hoped I cared about.

I often found myself thinking that from the people that Shelby meets, and their bearings on the overall narrative, down to where he finds himself at any given time, seems to heavily rely on coincidences. That, added with Shelby being a touch too perfect for my liking’ detracted a tiny bit.

The novel is set in 2067, as the title suggests. Due to the vast differences in technology and the fact that the blurb said it was set in the near future, my mind struggled to fathom how this could realistically be our near future. I feel it would have been better set further into the future as whenever something new and ingenious was mentioned I often felt like the blurb let it down by suggesting it was our near future. It might just be a problem as a reader that I have, but I need to be able to feel grounded in a world I am immersing myself into.

The overall concept is a pretty fantastic one. I, for one, would love nothing more than to be able to live out the lives of the characters I have either created in my own work or read in other peoples’. Having a theme park where that is possible seems utterly fantastic. As the blurb suggests, the sinister nature of the park adds a whole new dimension to the concept. It reminds me a little bit of a certain film, but I don’t want to mention what said film is as it would give away massive spoilers.

My only downsides with the park is that it took well over half of the novel before the reader even gets there and, when they do, I felt as though the time spent there was underwhelming and too simplistic as far as the actual use of the park went. I did enjoy the ending. I felt as though the pay-off was very good and the ending certain characters deserved.

All in all, it was one of those novels where I found myself pretty 50/50 as far as pros and cons go.