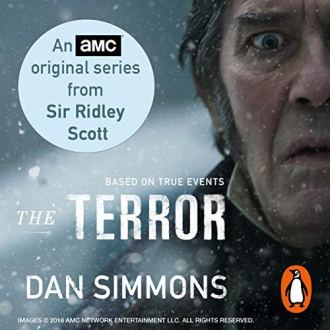 The most advanced scientific enterprise ever mounted, Sir John Franklin’s 1845 expedition in search of the fabled Northwest Passage had every expectation of triumph.

But for almost two years his ships, HMS Terror and Erebus, have been trapped in the Arctic ice. Supplies of fuel and food are running low. Scurvy, starvation and even madness are beginning to take their toll. And yet the real threat isn’t from the constantly shifting, alien landscape, the flesh-numbing temperatures or being crushed by the unyielding, frozen ocean. No, the real threat is far more terrifying.

There is something out there in the frigid darkness. It stalks the ships and snatches men. It is a nameless thing. At once nowhere and everywhere, this terror has become the expedition’s nemesis….

Terror is based on the true events of two ships (The HMS Erebus and The HMS Terror) as they tried to search for a route through the Northwest Passage in 1845. The expedition, led by Sir John Franklin, quickly found themselves blocked in by ice. The story begins with our crews having been locked in the ice for two years. Their supplies, patience and sanity are fast running out. When you add in the fact that some unknown horror stalks the ice, hunting the men of the naval ships, it makes quite an enjoyable prospect to get stuck into.

Obviously, the ordeals these men went through were very real so I feel bad taking pleasure in thinking of how the dire circumstances make for a great bit of horror entertainment. But the story also prompted me to do a fair bit of research on the two ships and, indeed, the men in question, so I feel it’s also serving to keep the memories of all involved alive to this day, over a hundred and fifty years after the expedition was launched. I’d be thrilled to think that people were thinking of me a hundred and fifty years from now.

I am a fan of historical fiction and love the language of times gone by. To my ears it sounds intellectual, elegant and just makes me feel at home (that’s a strange thing to say given that I was born in 1988 and not 1888). That being said, the language in this can be a bit heavy at times if you aren’t used to historical fiction.

I thought the author did a good job of fleshing out his characters and he wrote the escalating conflicts between the various shipmates incredibly well. You really develop a hatred for certain characters, especially when you know they are going to do something but they draw the doing of it out and you just sit there, feeling powerless to stop it. I felt, and this could be because I was listening to this during winter, that I was suffering alongside them. Whenever I was cold at work, I would think of the men and how the icy cold was their constant companion. In that way, the author has done a damn good job of keeping their plight with me.

One downside with ‘The Terror’ that I found was that, at times, it felt a bit slow and ponderous. I feel it could have been less lengthy than it was if certain parts weren’t drawn out. Other than that, I didn’t really have any real complaints about it. It was a good slow-burn horror story that achieved the difficult task of keeping an ever-present feeling of dread coming from not only the creature they were trying to avoid, but the general atmosphere they were living in. That and their own comrades. What more could you want? An unknown creature, a frozen landscape that’s trying to kill you and unrest across the ships. Chaos!

11 thoughts on “The Terror by Dan Simmons – An Audiobook Review”