Just having a quick glance over my TBR the last time I did this made me realise how many titles I had totally forgot about. So hopefully this will re-jog my memory of some of them.

Down the TBR hole was originally created by Lost in a Story, and here’s how it works (Admittedly, I am kind of cheating with my order of when added):

– Go to your Goodreads to-read shelf.
– Order on ascending date added.
– Take the first 5 (or 10 if you’re feeling adventurous) books
– Read the synopses of the books
– Decide: keep it or should it go? 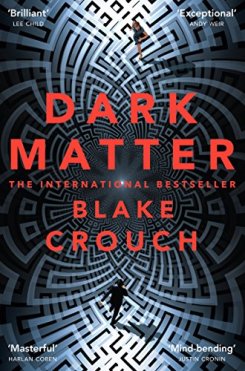 Dark Matter by Blake Crouch – This one has been on my TBR for a good long while now. Ever since I read (and loved) Abandon by Blake Crouch, several bloggers points suggested I give Dark Matter a go. I then saw lots of reviewers loving it, decided I had to go for it and … got side-tracked. A year or so later I have finally decided to give it a go. I am currently listening to the audio book version of this and will hopefully have a review within the next week or two.

The Dark Tower by Stephen King – I am a huge King fan and got excited about this a good long time ago. I tried the audio book, struggled to get into it as it felt as though I had walked into a book that I was already supposed to have some sort of knowledge about and just gave up there and then. I decided to put it on my TBR until such a time I fancied giving it a go as an actual book. After so long I still can’t generate the slightest bit of interest in ever reading this. So the time has come to get rid.

Dark Blood by A. J. Smith – This is the sequel to ‘Black Guard’, a book which I thoroughly enjoyed. I do, at some point, have every intention of getting around to finishing the series as I can tell that it is destined to be one of the greats as far as finished fantasy series goes.

Lost Boy by Christina Henry – This is one of those that I really like the sound of but kind of feel as though, whilst reading through, it could become very predictable. I think the same author has a whole range of alternate stories as far as much loved characters such as this goes and I am tempted by them all. I am just not sure it fits into the style of things I am currently enjoying right now. So I think it may have to go.

Nevernight by Jay Kristoff – I remember being quit excited at the thought of this. But, since putting this on my TBR, I have lost interest in too many stories that feature a small child as their protagonist. Whether it be a coming of age or (as this one seems by the blurb) a child learning to be an assassin at some sort of death church, I think I’ll pass. I’m enjoying Mark Lawrence’s Grey Sister series and don’t feel the need to add something else that sounds very similar to it.