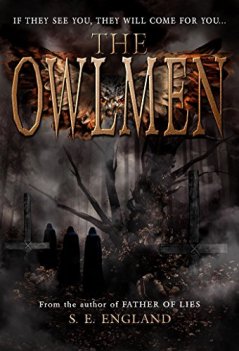 Ellie Blake is recovering from a nervous breakdown. Deciding to move back to her northern roots, she and her psychiatrist husband buy Tanners Dell at auction – an old water mill in the moorland village of Bridesmoor.
However, there is disquiet in the village. Tanners Dell has a terrible secret, one so well guarded no one speaks its name. But in her search for meaning and very much alone, Ellie is drawn to traditional witchcraft and determined to pursue it. All her life she has been cowed. All her life she has apologised for her very existence. And witchcraft has opened a door she could never have imagined. Imbued with power and overawed with its magick, for the first time she feels she has come home, truly knows who she is.
Tanners Dell though, with its centuries old demonic history…well, it’s a dangerous place for a novice…

The Owlmen takes us back to Tanners Dell, a place that featured so heavily in Sarah England’s sublime ‘A Deeply Disturbing Occult Horror Trilogy’, my reviews for which can be found here (Father of Lies, Tanners Dell & Magda).

In this follow on to the trilogy, Ellie and her husband move to Bridesmoor after purchasing Tanners Dell at auction with the hope that it will help Ellie recover after the psychological problems she has been suffering from.

I was incredibly excited to get stuck back into the world that I loved from the original trilogy. And, although I enjoyed The Owlmen, it wasn’t anywhere near the continuation I was expecting. It was good, but not amazingly so. I couldn’t help but feel the pace too slow at times and, due to those parts, it made the book feel a bit more laborious to get through.

It didn’t help that I didn’t really care for the character of Ellie, who is one of the three main POV characters along with Nora (a Macmillan nurse) and Toby (the policeman from the original trilogy that gets tricked into working for the cultists).

I found a lot of what was happening was essentially ‘rinse and repeat’ but just apply to different characters throughout the novel. I mentioned that I did not care for Ellie, I think this might be because of her irrational decision-making process. Half of the stuff she does seems to have no real reason for it being done other than it needs to happen to further the story. The whole witchcraft thing seemed to come out of nowhere.

Toby was interesting but the same stuff happened to him right up until the end of the novel and it felt as though it was happening like that just to keep him along for the ride so he had a reason to be around at the end.

I loved Nora and a lot of the creepier parts of the novel felt more chilling due to the fact that she was just a normal woman with no inkling of what was going on. It just felt spookier that way. How things go towards the end of the novel with her just felt abrupt and almost like more should/could have happened.

Speaking of the creepy bits, there was some seriously good moments. I particularly loved anything that was going on in Lydia’s cottage. Reading in the dark, before bed, candles flickering, as I do with horror books, it just gave them that extra added flare as far as the creepy-factor goes.

The ending was a perplexing mix of excitement and ‘oh, is that it’? I enjoyed it, I just felt the end was a bit stop-start rather than one continuous flowing motion.

That being said, I would certainly read more in the series, if there is any more already out/due to come out as it was left in such a way that leaves me curious how things turn out for everyone involved going forward, especially now that the Dean family has been taken down a peg.

5 thoughts on “The Owlmen by Sarah England – A Book Review”