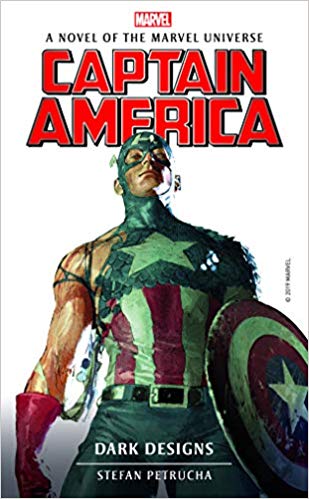 SUPER HEROES SURVIVE. IT’S WHAT THEY DO.
BUT SO DO THE VILLAINS THAT HAUNT THEM.

Steve Rogers knows the art of survival better than most. Decades under ice will do that to a man. But the Avengers chipped more than rock-hard morality and super-strength out from under that permafrost. When Cap takes out a terrorist cell threatening to poison the world, he’ll discover a threat far more deadly. An incurable virus has hidden in his body for years – and now it’s come to the surface. To save the world, he’ll have to return to his own personal hell: deep freeze.

And he’ll have to take an old friend with him. Having survived his own death by inhabiting a clone of Steve Rogers, the Red Skull has inherited the virus – and he’s a little less willing to play martyr. As the deadly disease shifts and evolves, new patterns emerge. Can Captain America contain the Red Skull before the virus runs rampant?

My Rating for ‘Captain America: Dark Designs’: 4 out of 5

I received a copy of ‘Dark Designs’ from the publisher in exchange for an honest review.

I am guilty of never having been aware that Marvel did novels other than the graphic variety so, as you can imagine, when one of my favourite Marvel heroes (Captain America) had a novelisation and it was offered my way I said yes without hesitation.

That’s not to say I went in expecting a world-beater. I was a bit hesitant; thinking that comic books were the perfect medium for the kind of story told but, to my surprise, the novel was very good!

The writing was far more intelligent than I expected for a comic book turned novel (I know, I know, never pre-judge … but it’s hard not to). The author showed an in-depth knowledge of the weaponry being used, the technology and the entire world around him. If anything, it read more like a very good thriller with superheroes instead of spies/archaeologists/pencil-pusher-turned crime fighter. Considering most characters can do nearly anything and are so cringingly perfect in thrillers (Jack Reacher etc …) it wasn’t hard to accept a character that was a genuine superhero as the main character.

But anyway, back to the novel. The overall plot is that Captain America was infected by a virus (way back in the forties when he went into the ice) that has been laying dormant for over 60 years. Only now, with the super-calibrated scanners that S.H.I.E.L.D have at their disposal was the minute organism noticed. So, as you can imagine, the C.D.C and several virus specialists were quite keen on Cap being but into quarantine. I mean, who wants an Extinction Level virus just walking around being exhaled into the good clean air we all breathe?

Dark Designs is very much a tale of two patients, however. The Red Skull, Captain America’s arch-enemy, who exists in a cloned body of Steve Rogers (Captain America), also has the virus and, unfortunately for him, it’s not dormant like in Cap’s body.

His ever-looming date with death at the hands of virus prompts the Skull to set into motion a plan that will see him end Captain America once and for all. What better way could there be to go out? On what higher note could he leave the game than by removing the only piece from the board he ever truly wanted gone?

At times, I did feel the plot was too linear. It was obvious what was coming next throughout. It became another ‘not another one of those, I can see another one of those is about to pop up’ things. But, thankfully, each of those points are written in an intelligent-enough way that it doesn’t really feel like the hard slog I expected it to. So that turned a potentially boring, laborious read into an enjoyable fast one.

My only real complaints were that Steve Rogers seemed far more intent on flirting with a Wakandan doctor than most anything else. Most of his thoughts whenever she was around centred on asking her out. It just kind of made him come off as a over-excited college kid than anything else. The other main gripe was the Red Skull. Whenever he had a chapter it felt like one massive info dump. Even though his confidant was a highly intelligent scientist, he felt the need to explain every small detail about everything to him. It got very frustrating and just made me yearn for a non-Skull chapter.

Overall, though, Dark Designs was an excellent read and I look forward to dipping my toe into the Superhero novels pond in the future. Considering this was number ten (I think) in the Marvel series, it’s an easy place to pick up as there doesn’t appear to be any prior knowledge needed.