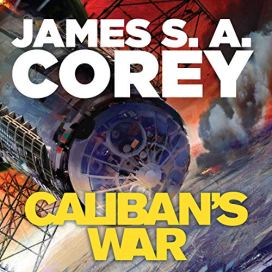 For someone who didn’t intend to wreck the solar system’s fragile balance of power, Jim Holden did a pretty good job of it. While Earth and Mars have stopped shooting each other, the core alliance is shattered. The outer planets and the Belt are uncertain in their new – possibly temporary – autonomy.

Then, on one of Jupiter’s moons, a single super-soldier attacks, slaughtering soldiers of Earth and Mars indiscriminately and reigniting the war. The race is on to discover whether this is the vanguard of an alien army or if the danger lies closer to home.

As fantastic and enjoyable as ‘Caliban’s War’ was, it wasn’t the sequel I expected it to be. In ‘Leviathan Wakes’ we had two character POVs and in ‘Caliban’s War’ we have four. This is in no way a problem but I just felt like I was almost reading something entirely different as opposed to a continuance. Most likely due to how different the POVs were and what drastically different aspects of the story they told, whereas in ‘Leviathan Wakes’ Miller and Holden weren’t massively different as say Bobbie and Prax.

But what a story they were telling! From the humble botanist just looking for his kid to the displaced Martian marine trying to make her way in an environment she is far from used to, ‘Caliban’s War’ was filled with excitement and interest from the start. And to steal from the opening line of this paragraph … What a start! Nothing beats a bit of high-octane action against something even The Terminator might flee from.

‘Caliban’s War’ had a very different feel to it than ‘Leviathan Wakes’ which was by no means a bad thing (as is evident by my rating of it). But it didn’t really feel very much like a sequel. It felt more like a story set in the same universe sharing some of the same characters with a whole host of new ones. I get the distinct feel that I would be able to stop reading/listening after any given book and pick up a good while later without losing much, if any, enjoyment. Which is a fantastic thing to have from a series that looks to be going on for nine or so books.

I found myself really enjoying the character development of Prax which, considering he starts off as nothing too interesting, surprised me. So well done to the authors on that one. We are introduced to one of the main characters from The Expanse tv series in Chrisjen Avasarala who is one of the most bad-ass old ladies you’re ever likely to meet. She also has a mouth that could put a dock worker to shame.

The overall plot focuses around half of the characters going on a very public search for Prax’s missing daughter whilst the other half try to avoid all-out war between Earth and Mars. How the authors pull the strings together and merge the plotlines is wonderful and puts this quite highly in my list of favourite sci-fi novels due to the complexity of the plot whilst at the same time having it so easy to follow.

The entire piece just feels like it has incredible depth of all things essential: world, character and plot. What more could a sci-fi nut need when diving into a good space opera?

24 thoughts on “Caliban’s War by James S. A. Corey – An Audiobook Review”