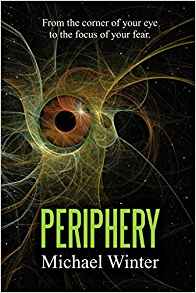 Tampa Fire Rescue paramedic Andrew Tate thought he had put all of his father’s crazy nonsense behind him. Twenty years ago, John Tate had been the respected dean of biology at the University of Tampa, a coolly intellectual researcher and devoted family man. Certainly not the type prone to outbursts of hysterical dementia. Then one summer afternoon he returned home covered in blood, ranting about bizarre creatures hiding in plain sight and declaring his intention to move out in order to protect his wife and son from the horrors now stalking him.

For the past two decades, the senior Tate has lived at the periphery of his son’s life, making only occasional contact while conducting what he calls “research” into his discovery. It’s an uneasy relationship, but Andrew is thankful his deranged father has chosen to remain at arm’s length.

All that changes, however, after Andrew is drawn into a hostage standoff. During the course of a tense negation with the captor, he beholds something that seems to validate his father’s claims: a living nightmare exposed for all to see and yet strangely camouflaged, both there and not there. It will be the first in a series of unwanted discoveries that will lead Andrew to the realization that a barely-glimpsed world exists at the edge of our awareness, a shadow ecosystem populated by terrifying denizens lurking in the light, awaiting the return of something vast and ancient and malevolent.

I was given a copy of this book for free in exchange for an honest review.

Periphery follows Andrew Tate on his journey from complete non-believer, to mild sceptic, finally into full-blown believer of the madness spouted by his father. Creatures that can be seen in the periphery of your vision, living amongst humanity but, to the vast percentage of the population, completely invisible. Our brains have evolved not to see them due to the fact that, once they know you can see them, they attack.

The opening to this fairly unique concept gets you hooked. It builds a solid world with characters that are not only believable, but easily relate-able. Not always likeable, but relate-able. Whether it’s the good guys, the less good guys or the outright bad guys, the author fills the world he is crafting with real-feeling characters. This makes it a far more enjoyable read and easy to get into.

The pacing is pretty good for the first third, it then slows into tedium for the middle third (to the point where I was barely making progress every time I picked the book up), but then erupts into an outright romp of action and fast-paced awesomeness, that would fit in well with any best-seller, in the final third. I really enjoyed reading the final third to the point where it bumped my ‘set in stone, there’s no way the author can change my mind’ rating of 3 stars up to a 4. I feel that there was also a nice bit of closure in what I class as epilogue 1 of 2.

The creatures created by Winter in Periphery, although influenced by Lovecraft, are entirely new and of the author’s own mind. There is the odd mention to Lovecraftian beings, but for the most part the cosmic horrors in Periphery are very fresh and new. It isn’t all seriousness, doom and gloom, either. The author threads a lot of light-hearted moments (most notably through how the characters are forced to communicate nearer the end) you can’t help but laugh when they are trying to be serious. I couldn’t decide if I liked that aspect of it or not. I’m still kind of on the fence.

I found myself getting attached to the characters without really realising I was doing so. I only really realised this whenever they were put in danger that it didn’t look like they’d emerge from unscathed. I feel the closure-feeling you get in epilogue 1 of 2 solidifies this. Epilogue 2 feels like a set up for a potential second book. I’d be curious about it, but I didn’t feel a great interest in the characters introduced in it. So only time will tell on that one. After all, those characters only had a handful of pages to shine. Hardly fair of me to judge them so quickly.

One major negative that would have kept this from getting a 5 star rating no matter how good the story could have been was the editing. The first half seemed fairly well-edited, but the second half gradually slipped from the occasional typo/spelling mistake to finding three or four every twenty pages. At times it felt like editing was the sort of thing that happened to other books and this one just kind of hid on the periphery of an editor’s vision (see what I did there?). This was a review copy, and for all I know the mistakes could have been cleaned up in the version that now resides on Amazon, but I can only review what I have in front of me.

Although I enjoyed this, it will be the last cosmic horror I sink my teeth into for a good while. This year has seen me not only binge watch Stranger Things from 1st to last, but I’ve read a couple of good cosmic horrors (this one included) and listened to possibly the worst cosmic horror I ever had the misfortune to sit through (Necronomicon …Firmly hold to my opinion that Lovecraft was an idea man with no business holding a pen).

I’m glad that my self-imposed Cosmic Horror hiatus is going out on a high. Thanks to the author for giving me the chance to experience this one, I can only apologise for the lateness of my review. The past couple of months have been hectic.

4 thoughts on “Periphery by Michael Winter – A Book Review”