Happy New Year, folks. I thought I’d start my new year off in a good way with a good book. Hope you all have a great year ahead! 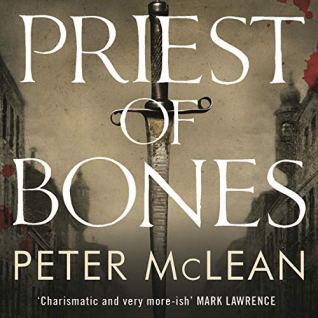 ‘Sixty-five thousand battle-shocked, trained killers came home to no jobs, no food and the plague. What did Her Majesty think was going to happen?’

Tomas Piety takes his duties seriously: as a soldier, as a priest of Our Lady of Eternal Sorrows and as a leader of men. He has come home from the war to reclaim his family business, to provide for his men and to ensure the horrors of Abingon can never happen in Ellinburg.

But things have changed: his crime empire has been stolen, and the people of Ellinburg – his people – have run out of food and hope and places to hide. With his best friend, Bloody Anne, his war-damaged brother, Jochan, and his new gang, the Pious Men, Tomas sets out to reclaim what was his.

And as Tomas is dragged into a web of political intrigue by the sinister Queen’s Men, forced to work against the foreign infiltrators lurking in the backstreet taverns, brothels and gambling dens of the Stink, one thing becomes clear.

The war has just begun.

Priest of Bones sees Thomas Piety and his gang return to Ellinburgh after the war has been won. They return to find the streets their gang once ran in the hands of other, unfamiliar faces and a city that has grown weak in their long absence.

Obviously, they want to change that.

This is a book for anyone that enjoys their fantasy with a healthy of dose of dark, gritty reality. The best way to describe Thomas Piety, a priest of Our Lady, is to think of how Robin Hood might have turned out if he were a gangster. He has all the dark and nasty traits of a fantasy world mob boss, but he still loves the streets and the people he protects. Those who pay their protection money to the Pious Men (Thomas’ gang) have in them a genuine protector who will see any harm or loss suffered made right in whatever way he can. The dynamic of being both a bad guy and a good guy all at once, makes for an interesting character. Certainly makes him feel more three-dimensional and real than some other characters I have read in the past who are just names on the page with a bit of flair about them.

Priest of Bones has been described as a fantasy version of Peaky Blinders, I’d say everyone is fairly spot on in that likeness. It bares a lot of similarities to the hit show and the bleak feel to the world fits perfectly. You have your gang, returning from a war on foreign shores turning out to be the, if not good guys, at least the anti-hero/grey area good guys (if that makes sense). And there’s obviously other gangs that have taken their place and need stamping out. All makes for an entertaining, fast-moving plot set in and interesting world. Especially when you add in the shady, underhanded dealings of the city’s elite and the threat of foreign powers muscling in.

The story is told from the viewpoint of Thomas Piety as he recounts his life, or at least his life upon his return from the war, and it has a very distinctive voice because of this. Distinctive and, at certain times annoying. For instance if I had to hear the phrase ‘and that was good,’ one more time I may well have cried, but it adds to the realistic feel of it as it’s being written in a way that the author (in this case Thomas Piety) would write as he speaks, so you have to expect the regional colloquialisms.

Obviously, with this being a gang-style book, there are some pretty gruesome moments. None of it feels over the top, though, due to the gang aspect.

Priest of Bones also has some of the more interesting characters I have come across. Thomas is interesting enough, but his brother Jochan is also incredibly interesting and you can just tell there’s something darker living beneath the surface. Billy the Boy is another one you feel you need to watch as well for good development. The author does incredibly well of making the more minor characters interesting and always seeming like they are on the verge of doing more (Cutter, for one). So yea, all in all, this book has an awful lot going for it with very few negative points.

I listened to the audio book version of this work and can say without a shadow of a doubt that it was one of the more engaging listens I have had this year. I think I breezed through it in three or four days and didn’t want it to end. I went and downloaded the sequel immediately after because of this … sadly, the third instalment isn’t out at the time of writing this, so I can’t pull that same trick again. The narrator is quite easily the only man I could ever envision reading this (I know the old ‘ nobody else could do it so well’ is a bit cliché, but his voice and tone are just so perfect that it seems like he was born to voice a gangster. Or, as Thomas would put it, a businessman.