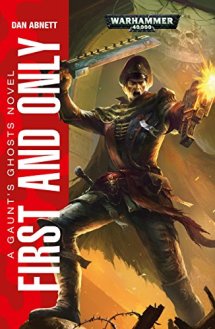 In the nightmare future of Warhammer 40,000, the galaxy-spanning Imperium is riven with dangers. In the Chaos-infested Sabbat system, Imperial Commissar Gaunt must lead his men through as much in-fighting amongst rival regiments as against the forces of Chaos. First and Only is an epic saga of planetary conquest, grand ambition, treachery and honour.

I received a copy of this book in exchange for an honest review.

August 2019 marked 20th anniversary of First and Only. As the author says at the start ‘there’s nothing like being told that to make you feel old’ … yes there is, Dan, remembering when it came out!

I had been wanting to re-read this series for quite some time and seeing this was the book’s 20th birthday, I thought now was the best time to start.

With First and Only, Abnett tries (and succeeds) at getting A LOT of plot into this novel. We get to know the warhammer fandom’s favourite guard regiment, we are treated to in-fighting, betrayal, military-political intrigue, conspiracy and a whole lot of juicy backstory that, even though you can see it coming like a train down the line, you can’t stop yourself from smiling because of it.

From start to finish this whole novel is just nothing short of enjoyable. It’s books like this (and authors like Dan) that got me so hooked into the Warhammer and Warhammer 40,000 universe as a child. For those of you that like your military sci-fi dark and visceral, look no further than the Gaunt’s Ghost series. Obviously you should look further as the Black Library has an amazing range of dark, grim, gritty goodness just waiting to be discovered, but this is the perfect place to start.

If you are new to the whole Warhammer/Warhammer 40k scene then the fact that there are hundreds of novels out there can be a bit daunting. You don’t have to read everything they put out to get something out of the franchise. Everything is not part of one big series. Everything has it’s own little series, like Gaunt’s Ghosts, for you to sink your teeth into. If you haven’t tried this franchise before, I would highly recommend starting with First and Only.

Obviously, the fact that I have given this a 4 yet spoke nothing but praise so far must tell you one thing: it’s not all perfect. And it isn’t. There are a couple of very minor things that, although they don’t detract from the enjoyment, they do slightly detract from that 5 star rating.

My main gripe is that the speech at certain parts doesn’t feel realistic or flow like actual conversation might flow. As an author myself, I can say with my hand on my heart, speech is an absolute nightmare to get perfect/authentic-sounding. For the most part, Dan does that just fine. It’s just those odd parts where the speech sounds robotic and too ‘written rather than spoken’ that were a bit of a drawback for me. This was more at the start of the novel than the middle or end, so maybe it was just the author getting to grips with the voices of the characters? Who knows?

My other slight moan is the memory parts. After each ‘Part’ (First and Only is broken up into six main parts) there is a memory chapter. These parts are basically used for when something has just happened, that we had zero knowledge of, or when something is about to happen and Gaunt needs something shoe-horned into his backstory to make the next bit work. ‘What’s that, captain? The next room requires a rainbow-coloured yorkshire terrier or there will be no plot progression? Darn! I wish I had one of those.” Cut to memory chapter where Gaunt, it seems, had a rainbow-coloured yorkshire terrier left to him in a will by an aunt suffering from the plague. What a stroke of luck.

Obviously (and unfortunately) rainbow-coloured yorkshire terriers do not make an appearance. That was just a random (yet totally plausible) example I gave to get my point across. It actually sounds annoying that these memory sequences are in there and, when I start reading them I just want to feel annoyed. But, by the time I’ve finished that scene, I sit there with a ‘wow, that was awesome,’ outlook. So yea, kind of annoying, but they’re essential and pretty cool. I just hate how it’s so painfully easy it is to see them coming.

My slight negatives aside, this really is an awesome sci-fi romp of utter bloody grimness. And anyone that enjoys the darker side of military sci-fi will love it. So give this one a try. It is genuinely the most commonly read book published by the Black Library and is still going strong. Keep the love for Gaunt and his Ghosts alive.