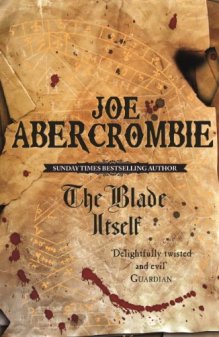 Inquisitor Glokta, a crippled and bitter relic of the last war, former fencing champion turned torturer, is trapped in a twisted and broken body – not that he allows it to distract him from his daily routine of torturing smugglers.

Nobleman, dashing officer and would-be fencing champion Captain Jezal dan Luthar is living a life of ease by cheating his friends at cards. Vain and shallow, the biggest blot on his horizon is having to get out of bed in the morning to train with obsessive and boring old men. And Logen Ninefingers, an infamous warrior with a bloody past, is about to wake up with plans to settle a blood feud with Bethod, the new King of the Northmen, once and for all – ideally by running away from it.

But as he’s discovering, old habits die hard….especially when Bayaz gets involved. An old man with a terrible temper and a pathetic assistant, he could be the First of the Magi, he could be a spectacular fraud, but whatever he is, he’s about to make the lives of Glokta, Jezal, and Logen a whole lot more difficult….

The First Law Trilogy is, and always will be, one of my all time favourite fantasy series. This is a re-read for me as I read it a good long time ago and my memory seems to have forgotten enough of it to make it feel almost new to me. Which is a good sign. Means I can almost enjoy it for the first time again.

With the Blade Itself, Abercrombie has not only created a complete world that is utterly addictive, but he has crafted some of the most memorable characters known to the fantasy genre. Whether it’s Inquisitor Glokta and his eternal struggle with stairs. Or Logen Ninefingers and his sensibly bleak outlook on the world. These characters aren’t perfect nor are they the sort that just have everything happen to them in a way that they can brush off without incident. They feel real and they suffer all of the embarrassments that real people would suffer under the circumstances. Just adds to the realistic feel.

The writing itself is incredibly smooth and there are no jarring transitions between characters. Every chapter has something in it that makes it feel interesting which isn’t the easiest task to achieve as an author. The overall narrative voice used is a very informal one and it makes the reader feel like s/he is almost in on it with the characters rather than just listening to some narrator telling a story. More often than not I felt myself struggling up staircases or to simply walk up a slight incline with Glokta as though his pains were mine. Or sharing the little bleak moments of humour that Logen has as though it was a musing for us two.

It’s one of those books that, despite being fairly long, does not feel like it in the slightest. I reckon all three could be put back to back and I’d not feel the slightest burnout or wish to try something new.

It also has one of the most interesting meddlesome wizards in it since Gandalf. Bayaz is a man that does not like the way things are and intends that people live as they were meant to. Whether they like it or not. They typical old man with a ‘back in my day’ mentality and the power and influence to ensure that his day is re-lived again. Love him or hate him, his fingerprints are all over this world and he is a huge part of what makes the series turn.

Abercrombie has a knack for the gritty fight scenes that make dark fantasy so enjoyable. There’s no artful flourishes or ‘awesome finishing moves’. Look at a named man wrong and he’ll hack the back of your head off with an axe without a second look to see how much of a mess he made. Pure, unadulterated and grim. Just the way I like my fantasy.

The narration for this one was absolutely stunning. Steven Pacey and Abercrombie are a winning combination. I honestly don’t think I’ve seen a negative thing said about Pacey’s voice work on these books and nothing but praise will ever come from my lips. Really brings all of the characters to life in a vivid way.

Looking forward to delving back into this series and, beyond that, the world as a whole.