Welcome to the first post in my ‘Small Press Spotlight’ series where, each post, a different independent publisher will be interviewed. Please spread the word and help our smaller publishers thrive.

Peter talks about what goes into the day to day running of an independent publisher, how Red Cape Publishing goes about finding its authors, the ‘book to audiobook process’ and much more.

I hope everyone enjoys reading about Red Cape as much as I did and that this post might steer you their way next time you have that urge for something creepy. There’s certainly a wide variety on offer, something to please every type of horror reader.

There’s a couple that have caught my eye and I’ll be purchasing a few e-books in the coming days, so look for my reviews on some of these gems in the coming weeks.

For anyone who would like to check Red Cape Publishing out, their website can be found: here

Let’s hear a little bit about yourself first. Who are you and what made you get into the world of publishing?

My name is Peter Blakey-Novis (I write under P.J. Blakey-Novis) and I’m a writer and publisher from the south coast of England. The publishing house came about, to begin with, as an umbrella for the various projects my wife (Leanne) and I had put together. At the time this covered my own books, a digital magazine, a horror paperback subscription service (Boxes of Blood), and my wife’s design work as a graphic designer.

How did you decide on the name of your publishing house?

Leanne chose the name (she’ll tell you that she’s the real boss) and it comes from her love of Red Riding Hood. We previously ran a catering business called Red’s Light Bites but we took the step to launch Red Cape Publishing as it was a business we were far more excited about, and one that also fitted around our children in a better way.

How many people are involved in the running of Red Cape Publishing?

At the moment it’s just the two of us, with the daily tasks split well between us. The business is growing steadily but we are cautious not to take on more than we can manage between the two of us just yet.

What genre/s do you publish (genres, sub-genres etc …) and what made you opt for these genre/s?

As I write predominately horror, we tend to opt for this. It’s where I already have a following and connections so it makes sense. We have discussed publishing other genres in the future, but this would require some preparation in being able to market non-horror books effectively.

Where do you sell your books, and in what formats are they available?

Currently, all of my own books, plus the books we have published for our two other authors, are available through Amazon and Barnes & Noble in paperback form, Amazon, Nook, Kobo, Apple etc for e-books, as well as most of mine being available on Audible. We have also published a series of horror anthologies which are available on Amazon and included in Kindle Unlimited.

Could you explain a little about the process of getting your books onto Audible?

I’m fairly new to Audible, the first of my books having been released on there and iTunes a little over a year ago. It’s a simple enough process through the dashboard on ACX. Once a sample of the book has been uploaded you are then able to accept auditions. There is the option to pay the narrator or to go for a royalty split. Although it’s a straightforward process, it can take some time depending on how busy the narrator is and how long it takes for Amazon to approve the finished book. The main piece of advice I can give is to wait until you have a few auditions so you can listen to them one after the other – it gives a good comparison. Overall, audio books are well worth producing (they account for well over half my royalties).

What goes into the daily running of Red Cape Publishing?

At the end of each week we allocate the tasks for the following week. Some things are the same each week, such as advertising the books across social media, scheduling posts, writing blog posts etc. Leanne takes care of this side of the business, as well as other PR work such as contacting bloggers and reviewers, posting press releases, and so on. My own hours are currently filled with editing work, reading submissions for our upcoming anthologies, and formatting the books as they become ready. Occasionally I even get time to write my own books!

What’s your favourite aspect of being an independent publisher?

There is a lot of freedom to the job, which is what appealed to me about self-publishing when I first started out. We have built up a good reputation and have been fortunate enough to work with some superb writers. Seeing the business grow each month makes it feel worthwhile.

How has COVID-19 affected your business, if at all?

To begin with, it didn’t as we were already working from home. But when the schools closed in late March, things began to slow down considerably as a lot of hours are now filled with home schooling, pushing our work-related tasks to the evenings. We also run a twice-yearly book fair in Brighton which had to be cancelled, as well as having had plans to attend a few events local to us.

When it comes to finding authors, do you rely on unsolicited submissions? Or do you actively seek people out via some form of advertising as well?

We haven’t advertised for submissions. We had decided that we would begin taking on new authors at the start of 2020 and had already been approached by one, Antoinette Corvo, in late 2019. In January of this year we took on the novel Madman Across the Water, after the previous publisher had stopped trading. We are currently reading submissions from four other authors which would fill our limit of six new authors for the year. We don’t plan to take on more than that so we are able to properly market the books.

If you are currently accepting submissions, could you give a brief bullet-pointed guideline as to what you like to receive as part of a submission to Red Cape Publishing?

We are not currently open for submissions, at least until we have read through the work we have received and made decisions about those books, but when we do have an open call it will be posted on our website under the Submissions tab.

If you had only one sentence to grab a potential reader’s attention and draw them in to read your books, what would that sentence be?

Red Cape Publishing offer a selection of books to suit the taste of any horror fan, from short stories to full-length novels, and covering a variety of sub-genres.

Hard though it may be to choose, can you list five books you’ve published that you feel best sums up Red Cape Publishing as a brand.

If I had to choose, I’d go with the following books due to the diversity on offer.

Madman Across the Water by Caroline Angel (an eerie, suspenseful novel)

For generations one family has been haunted by something… something that stalks. It sees and listens, it watches and follows. In the shadows and mist it waits, to take you, to hurt you, perhaps to kill you. If it doesn’t kill you, you’ll wish it did. A creepy, suspenseful saga of family, horror, and mystery, this is one story sure to leave you frightened of the woods at night, fog, and all things tall and slender.
Second Edition – Republished by Red Cape Publishing

Dirges in the Dark by Antoinette Corvo (a mysterious, occult-based novella)

When actress Cassidy May lands the lead in the story of Hellen Grimaldi’s life, she believes it could be the boost her career needs. However, the more she looks into the past of Hellen and the shocking events which led to her death, the more fearful Cassidy becomes about taking the role. Did Hellen truly summon demons during that fateful performance? Was Cassidy about to unleash the same hell that Hellen had? What dark forces were really at play behind the curtain?

Four by P.J. Blakey-Novis (a novella incorporating shorter stories within a longer one)

From the author of Embrace the Darkness, Tunnels, and The Artist comes Four. Four friends spend a night away camping in the English countryside, each taking a turn to tell a horror story that will terrify the others. But the group soon discover that there is more to be afraid of than just some campfire tales, and that no one is as innocent as they seem. 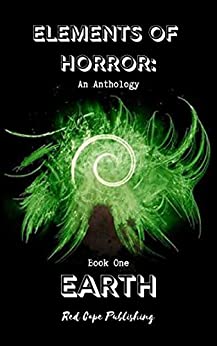 Elements of Horror Book One: Earth (our first themed anthology (followed by Air, Fire, and Water))

Elements of Horror Book One: Earth, is the first in a series of four horror anthologies based on the Elements. Within these pages you will find a variety of stories from some of the best independent horror writers on the scene today, including Theresa Jacobs, R.C. Rumple, David F. Gray, and many more. Fall into sinkholes, brave the tales of witchcraft, grotesque creatures, and demons, and feel the terror of explorations gone wrong. 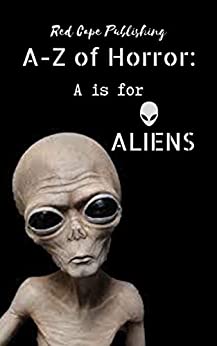 A is for Aliens (the first anthology in our A-Z of Horror series, blending science fiction with horror)

A is for Aliens, the first book in an epic series of twenty-six horror anthologies. Within these pages you will find a collection of thirteen stories from some of the finest independent writers on the scene today, blending science fiction with horror. From the humorous to the terrifying, A is for Aliens contains a diverse range of stories with each author taking a different approach to the theme.

Do you have any exciting releases planned in the near-future?

We have a lot lined up. As mentioned above, we are publishing a series of anthologies (The A-Z of Horror) the first of which was released in March. B is for Beasts releases May 13th, and C is for Cannibals and D is for Demons are available to pre order. We plan to release books E, F, and possibly G by the end of the year. As I said earlier, we have work from four authors to consider publishing, a sequel to Madman Across the Water is being written as we speak, and I have three of my own books coming over the next few months.

What are your goals and aspirations going forward?

Our focus has been on creating a recognisable brand, and having our name associated with quality books. Of course, we’d like to see an increase in sales, particularly for the authors we represent. We’d also like to get to more events, when things return to some form of normal.