I picked up a fair few books recently, some physical, some ebook and some audio book. There’s a few titles by smaller publishing houses that I’m looking forward to getting on to. One of the audio books has already been listened to and reviewed (The Mating Season) by the time this post will actually go live.

I particularly love how creepy the cover for ‘Tunnels and Other Short Stories’ is!

The Hard Goodbye by Chris Miller:

As the old axiom goes, if something seems too good to be true, it probably is. John Savage realized that too late.

Following the biggest job of their lives, John and his small crew think they’ve got it made. But a lawyer, a junkie, a crooked cop, Savage and his girlfriend have unknowingly opened Pandora’s Box. And they won’t know it until it’s too late. As the brutally tortured bodies of their partners come to light, tensions rise all the way to the screaming, chaotic conclusion of this bloody crime thriller.

High risk brings high reward, but the safe bet is usually the smartest. Stick to the plan, or get ready for the hard goodbye.

Madman Across the Water by Caroline Angel:

For generations one family has been haunted by something… something that stalks. It sees and listens, it watches and follows. In the shadows and mist it waits, to take you, to hurt you, perhaps to kill you. If it doesn’t kill you, you’ll wish it did. A creepy, suspenseful saga of family, horror, and mystery, this is one story sure to leave you frightened of the woods at night, fog, and all things tall and slender.

A is For Aliens – An Anthology by Red Cape Publishing

A is for Aliens, the first book in an epic series of twenty-six horror anthologies. Within these pages you will find a collection of thirteen stories from some of the finest independent writers on the scene today, blending science fiction with horror. From the humorous to the terrifying, A is for Aliens contains a diverse range of stories with each author taking a different approach to the theme.

Jealousy. Betrayal. Murder. And a hunger for vengeance that spans the centuries…

But as Alex begins to discover the dark truth about the asylum’s past, he, Claire, and their friend Marianne find themselves on a nightmarish journey. Each will face the deadly consequences of the evil that began with the construction of the first Belle Vue Manor by an aristocratic French émigré in 1789, as well as the cruelty and satanic practices that continued when it became an asylum for the insane.

As the two strands—past and present—unfold, Alex uncovers a supernatural mystery where revenge is paramount and innocence irrelevant—without being aware of the price he, and those around him, will pay.

The Gutter Prayer by Gareth Hanrahan:

The city of Guerdon stands eternal. A refuge from the war that rages beyond its borders. But in the ancient tunnels deep beneath its streets, a malevolent power has begun to stir.

The fate of the city rests in the hands of three thieves. They alone stand against the coming darkness. As conspiracies unfold and secrets are revealed, their friendship will be tested to the limit. If they fail, all will be lost and the streets of Guerdon will run with blood. 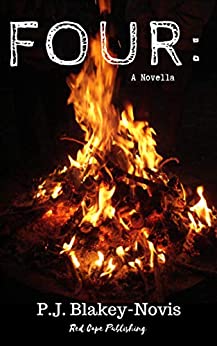 {Gifted in exchange for an honest review}

Four friends spend a night away camping in the English countryside, each taking a turn to tell a horror story that will terrify the others. But the group soon discover that there is more to be afraid of than just some campfire tales, and that no one is as innocent as they seem.

{Gifted in exchange for an honest review}

Tunnels and Other Short Stories by P.J Blakey-Novis:

Tunnels takes you on six terrifying journeys full of terror and suspense. Join a group of ghost-hunters, dare to visit the Monroe house on Halloween, peek inside the marble box, and feel the fear as you meet the creatures of the night.

In the bleak, haunted underworld of Shyish, a vengeful Slayer seeks the Lord of Undeath.

Gotrek Gurnisson returns, his oaths now ashes alongside the world-that-was, his fury undiminished. Branded with the Master Rune of Grimnir, the God that betrayed him, and joined by Maleneth Witchblade, a former Daughter of Khaine turned agent of the Order of Azyr, the hunt has taken them far and wide through the Realm of Death. Will Gotrek find a path to the Undying King or will the underworlds claim him as their own?

The Mating Season by P.G. Wodehouse:

At Deverill Hall, an idyllic Tudor manor in the picture-perfect village of King’s Deverill, impostors are in the air. The prime example is man-about-town Bertie Wooster, doing a good turn to Gussie Fink-Nottle by impersonating him while he enjoys fourteen days away from society after being caught taking an unscheduled dip in the fountains of Trafalgar Square. Bertie is of course one of nature’s gentlemen, but the stakes are high: if all is revealed, there’s a danger that Gussie’s simpering fiancée Madeline may turn her wide eyes on Bertie instead.

It’s a brilliant plan – until Gussie himself turns up, imitating Bertram Wooster. After that, only the massive brain of Jeeves (himself in disguise) can set things right.