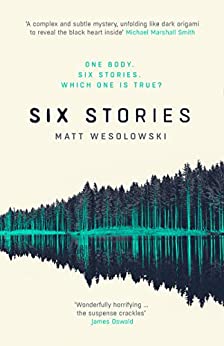 One body. Six stories. Which one is true? 1997. Scarclaw Fell. The body of teenager Tom Jeffries is found at an outward bound centre. Verdict? Misadventure. But not everyone is convinced. And the truth of what happened in the beautiful but eerie fell is locked in the memories of the tight-knit group of friends who embarked on that fateful trip, and the flimsy testimony of those living nearby. 2017. Enter elusive investigative journalist Scott King, whose podcast examinations of complicated cases have rivaled the success of Serial, with his concealed identity making him a cult internet figure. In a series of six interviews, King attempts to work out how the dynamics of a group of idle teenagers conspired with the sinister legends surrounding the fell to result in Jeffries’ mysterious death. And who’s to blame… As every interview unveils a new revelation, you’ll be forced to work out for yourself how Tom Jeffries died, and who is telling the truth. A chilling, unpredictable and startling thriller, Six Stories is also a classic murder mystery with a modern twist, and a devastating ending.

I’ve seen nothing but good things said for this novel, and the series it’s become, so had to give it a try for myself. I’m not normally one to read many thrillers/mysteries but I’m currently pretty high on them so thought now was the best time to try.

Six Stories is unlike any mystery novel I’ve ever read. It’s not a high-octane thrill ride, but more of a constantly interesting and always intriguing case that you don’t want to put down.

I’m a huge podcast addict so the ‘told over the course of six podcast episodes’ format really appealed to me and I feel the author worked it really well in that respect.

You get the feeling, at the start of every chapter that each person is either going to be average and uninteresting or just tell you the same story over and over for 300+ pages. Fortunately, that’s not the case. Each story is similar, yet, due to being viewed from a different set of eyes, distinctly different.

Six Stories feels like you’re reading a true crime that isn’t a true crime. You also get a sense of empathy with the characters. I, personally, was glad the dead kid was dead from the start (that’s no spoiler, it’s in the blurb) and, because I kept getting that true crime feeling I kept feeling bad for the whole ‘thinking ill of the dead’ thing. Then I’d realise it wasn’t real and I could go back to being happy he got what he got.

I normally judge a thriller/mystery based on if I can guess who did it or what’s going to happen. If I can guess the end, completely, then it’s never going to score above a 4 as, to some extent, the book has failed. With Six Stories I felt that I knew what was going to happen, felt proud for working it out, only to discover what I guessed was only half of a pretty damn unpredictable ending. So, 5 out of 5.

Six Stories is a mixture of clever storytelling and clever POVs (the modern day land owner POV was particularly interesting and a nice touch.

All in all, it was one heck of a read and I look forward to carrying the series on in the future.

My only real complaint is that it’s got quite a few typos. Either the editor/proofreader needs to be worked harder or paid less.

It has one hell of a clever and beautiful cover. Love how the trees double as a sound wave.

16 thoughts on “Six Stories by Matt Wesolowski – A Book Review”