I’ve only been blogging for a couple of years and, much like everyone else, I’ve been reading ever since I figured out the knack of it. With that in mind, it goes without saying that there’s likely to be a good deal of books that I read before and have never really shown any love on here for. So this series of posts will be dedicated entirely to them.

The basic flavour of these posts will be my posting a list. Each book will have the cover, title, author, series, blurb and a mini review (about a paragraph or two long).

Be they good, bad or just painfully average, they may be read, but they are not forgotten (well … for the most parts. I find myself trying to remember the plot details of a good deal of some of them!)

I don’t know how long I’ll be able to carry this type of post on for, but I plan on doing it once a week, possibly every Monday, until I run out of steam. As the title suggests, this post is looking back at some of the memorable series starters. I’m listing five today (but there are so many more that will no doubt get a look in at a later date). 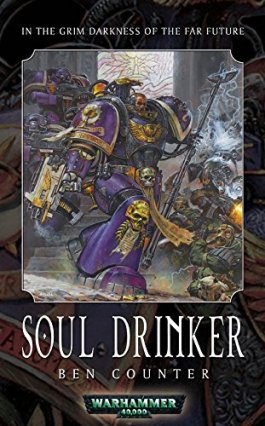 The Soul Drinkers have served the Emperor loyally for thousands of years, but their obsessive desire to retrieve an ancient relic throws them into conflict with those that they are honour-bound to obey. Faced with an impossible choice, will this proud and noble chapter back down, or rebel to forge a new destiny for themselves among the stars?

For me, this was something totally different to anything The Black Library were doing at the time. Back then, we either got your generic, goody-two shoes space marine chapters, the Imperial Guard or the occasional novel from a traitor/chaos stand point. The Soul Drinkers are a fantastic aspect of the Warhammer universe in that they are a renegade chapter.

Due to their actions and subsequent mutations they are hunted by the very Imperium that they still love and want to fight and die for. The combination of trying to fight for the side that wants you dead whilst fighting your regular enemies makes for an excellent story. The fast-paced writing from Ben Counter crossed with interesting characters and plot lines make this novel (and the series it spawned) an instant hit for me.

Assassin’s Apprentice by Robin Hobb – Book one in the Farseer Trilogy:

The kingdom of the Six Duchies is on the brink of civil war when news breaks that the crown prince has fathered a bastard son and is shamed into abdication. The child’s name is Fitz, and he is despised.

Raised in the castle stables, only the company of the king’s fool, the ragged children of the lower city, and his unusual affinity with animals provide Fitz with any comfort.

To be useful to the crown, Fitz is trained as an assassin; and to use the traditional magic of the Farseer family. But his tutor, allied to another political faction, is determined to discredit, even kill him. Fitz must survive: for he may be destined to save the kingdom.

I loved this one. It was an instant classic for me and I knew that I was going to have to chase down everything set in this universe that Hobb wrote … which turned out to be a lot. It’s vastly different from your usual ‘chosen one/young boy trained to save the world’ trope in that Fitz is the most miserable, depressive, thoroughly life-sucking person you could ever hope to meet.

But gods above and below is he an intriguing character that just makes you want to keep on reading. This novel/series/universe is populated with some of the most memorable characters from any story that I have ever read. Hobb’s talent is so heightened that, even when there’s nothing but boring, mundane, everyday life kind of stuff going on, it’s interesting to read about. I can’t wait to one day re-read the adventures of Fitz and Nighteyes (Nighteyes being my favourite character ever created. Ever). If you love fantasy and you haven’t read this book, you need to ask yourself ‘do I really love fantasy?’

Sharpe’s Tiger by Bernard Cornwell – Book one in the Sharpe series:

Richard Sharpe avoids the tyrannical Sergeant Obadiah Hakeswill and endeavours to rescue a British officer from under the nose of the Tippoo of Mysore.

But in fleeing Hakeswill, Sharpe enters the exotic and dangerous world of the Tippoo. An adventure that will require all of his wits just to stay alive, let alone save the British army from catastrophe.

Soldier, hero, rogue – Sharpe is the man you always want on your side. Born in poverty, he joined the army to escape jail and climbed the ranks by sheer brutal courage. He knows no other family than the regiment of the 95th Rifles whose green jacket he proudly wears.

If, like me, you grew up in England in the 1990s, you probably saw one of the hugely popular Sharpe tv movies starring Sean Bean. This is the first book in the series that spawned that iconic series of tv movies. However, unlike the films, they get dates right and accept that the war in India happened before the Napoleonic ones … but what’s historical fact when it saves you explaining why you made one series after the other?

We are introduced to the prime example of a working class hero. Much like most of the rank and file that made up the British Army back in the 1700s, Richard Sharpe was a bit of a scoundrel, illiterate and as common as any man could be. This book shows just how heroic the common man can be as Sharpe fights his way to glory, shining in some of the most realistic and gritty action scenes that have ever been penned. If you are a fan of historical fiction, or simply want to try dipping your toes in the HF waters, Richard Sharpe is the ideal man to guide you along the path. 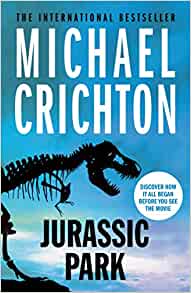 On a remote jungle island, genetic engineers have created a dinosaur game park.

An astonishing technique for recovering and cloning dinosaur DNA has been discovered. Now one of mankind’s most thrilling fantasies has come true and the first dinosaurs that the Earth has seen in the time of man emerge.

But, as always, there is a dark side to the fantasy and after a catastrophe destroys the park’s defence systems, the scientists and tourists are left fighting for survival…

I have always been dubious of reading books that were made into films. They just never seem to live up to the hype that got them there in the first place as far I’m concerned. Jurassic Park did not suffer that pitfall. In fact, after reading this and The Lost World, I can safely say that the films do not live up to the books as far as my own enjoyment goes.

Crichton has created a masterpiece that was truly ahead of its time. Just to have that idea and make it vaguely plausible was a hard ask. But to make it an exciting read as well really put the cherry on top for me. I loved every second of this and actually preferred The Lost World a little more than this. I can’t wait to re-read and just hope that my thoughts today match up with the love I felt back then.

Just One Damn Thing After Another by Jodi Taylor – Book one in the Chronicles of St. Mary’s series:

‘So tell me, Dr Maxwell, if the whole of History lay before you … where would you go? What would you like to witness?’

When Madeleine Maxwell is recruited by the St Mary’s Institute of Historical Research, she discovers the historians there don’t just study the past – they revisit it.

But one wrong move and History will fight back – to the death. And she soon discovers it’s not just History she’s fighting…

As a lover of ancient history and my one wish being to re-visit the time periods I love reading about so much, this series was a gift from the gods to me. The prospect of being able to go back in time to view how history really played out is an incredibly amazing concept and one that Jodi Taylor has evidently done very well.

Out of all the books I have read and series that I have started but not carried on with, this is the one that I kick myself for the most when it comes to having not carried on. I fully intend to … just when they aren’t so damned expensive. Or when I’m back on full wages after my furlough. Cannot wait to get stuck into this series again and see where the historians at St. Mary’s take me.

47 thoughts on “Read But Not Forgotten – Series Starters”