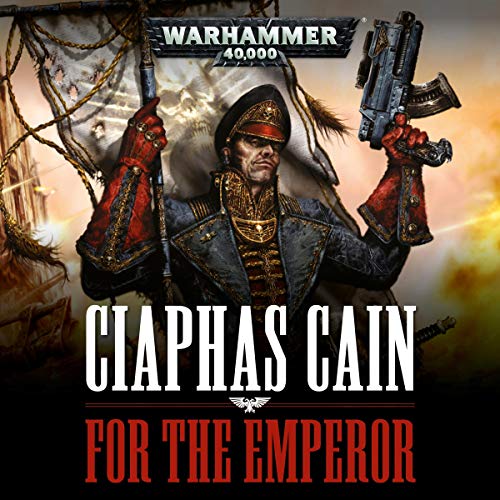 On an Imperial outpost world on the fringes of tau space, the renowned Commissar Ciaphas Cain and his fractious regiment of Valhallan Guard, newly created from the remnants of two devastated units, find themselves in the middle of a war.

As the Astra Militarum struggle to contain worldwide civil insurrection, can the wily Commissar Cain identify the real villain before the planet is lost to the Imperium forever?

This was a lot of fun to read the first time round and even more fun to listen to as an audio book. The blend of serious and comedy is done very well and is never in your face.

Commissar Ciaphas Cain, as he mentions himself frequently throughout the series of his memoirs, is a coward with more luck than any hundred people put together. If you have read the Flashman Papers then you’ll have a good idea of what to expect coming into the Ciaphas Cain books.

Ciaphas, along with his trusty aide, Jurgen, and the newly formed, mixed gender regiment of the Valhallan 597th are sent to the planet of Gravalax to deal with insurrection caused by the Tau (a race of blue-skinned, technologically advanced humanoid aliens).

Personally, although I enjoyed this very much, I felt this featured far too much talking, world-building and political back and forth to ever reach the five star rating I desperately wanted to give it. That being said, it’s not dull, just not as explosive as I know the Cain books can be.

When the author puts their foot down on the accelerator, though, it gets very exciting, very fast. Almost like that plodding ascent up a roller coaster before the downward rush when you reach the peak.

The character/world building done is essential, I just feel there was too much of it. You certainly get a much better knowledge of the Warhammer 40k universe as a whole from this book/series than you do others and, for that reason alone I’d say it’s hands down one of the best places to start.

As is usually the case with 40k novels, the action is fast-paced, dark, painful and hellishly exciting. Cain is one of the most endearing characters for me as far as Warhammer universe goes as he is the sort of hero that I love to read about. The kind that hates being thought of as a hero and is only their by a mixture of luck, fluke and skill. With every passing victory, his fame grows and he finds himself thrust into more and more deadly situations. Makes for the perfect character. You just can’t help but feel sorry for the sort of chap who does everything within his power to avoid danger but inadvertently finds himself rushing towards it instead.

It’s told in first person narrative and features footnotes explaining certain aspects that your unknowledgeable 40k reader would not know. Another reason for it being a perfect starting point in the Warhammer universe.

The narration was split between three narrators. The male voice told the bulk of the narrative where one female voice read the footnotes (as they were added by Inquisitor Amberly Vale upon editing Cain’s archive) and the second female narrator was given the unenviable role of reading the extracts from Jennitt Sulla’s ‘Like a Phoenix From the Flames’. Unenviable because of her painful love obsession with adjectives. At least five to every sentence!

All in all it’s a great blend of styles that makes for a wonderful opener in a wonderful series.