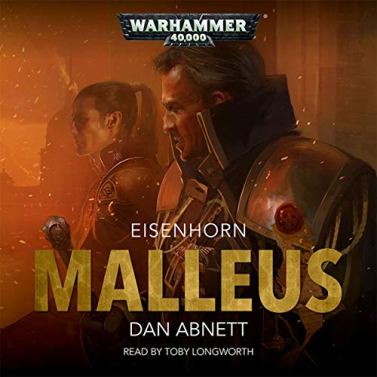 A century after his recovery of the alien Necroteuch, Gregor Eisenhorn is one of the Imperial Inquisition’s most celebrated agents. But when a face from his past returns to haunt him, and he is implicated in a great tragedy that devastates the world of Thracian Primaris, Eisenhorn’s universe crumbles around him. The daemon Cherubael is back, and seeks to bring the inquisitor to ruin – either by his death, or by turning him to the service of the Dark Gods.

For me, ‘Malleus’ was a heck of a lot better than the first in the series ‘Xenos’. I originally gave Xenos a 4 out of 5 and, whilst I wouldn’t change it, it feels less than that after reading Malleus.

Malleus takes place a century after Xenos (don’t worry, it features the same characters. 40k universe features rejuvination technology that can make people last for centuries). The Daemon, Cherubael, has been the focus of Eisenhorn’s hunting for that time and, in this book, he finds himself within spitting distance of his quarry.

I like Cherubael as a character as, unlike the other daemons in the 40k universe he has a layer of mystery to him. His daemonic kin seem to exist simply to kill, but he has ulterior motives that keep his ongoing existence within this series interesting.

Where Cherubael seems to have layers, our hero does not. Everything about Gregor Eisenhorn is fairly … bland. Even his narrative style (for these books are written in first person from his perspective) is fairly straight arrow and as devoid of personality as you can get. But, despite his lack of human-feeling personality, he’s an intriguing man who tells an interesting story.

This book was far more expansive with its plot than the previous book. In ‘Xenos’ everything felt a bit too linear and nothing really leapt out and made the reader think ‘wow, didn’t see anything like that coming’. All in all, it just felt like it was on a pre-determined line whereas Malleus felt far more free-roaming. Events of massive import happened in such a way that you couldn’t tell they would do so. The characters were led to places that didn’t feel in any way railroaded. It just felt like a breath of fresh air compared to the first book.

As good as this was compared to book one, the lack of personality in Eisenhorn and his storytelling, not to mention how so many secondary characters are introduced yet not fleshed out a great deal, keep this from ever reaching a 5 star rating as far as my money us concerned.

That being said, I’d still say that the Esienhorn books should be required reading for anyone looking to get into the 40k setting as the Inquisition is so often mentioned and seldom explained as it is in these books.

The narration, as with the first book, was wonderful. Toby Longworth really brings the character of Gregor Eisenhorn to life and does his lack of anything regarding enthusiasm proud. That’s meant as a compliment, not an insult. His voicing of the daemons are wonderful as are his voices for the other characters.

20 thoughts on “Malleus by Dan Abnett – An Audio Book Review:”