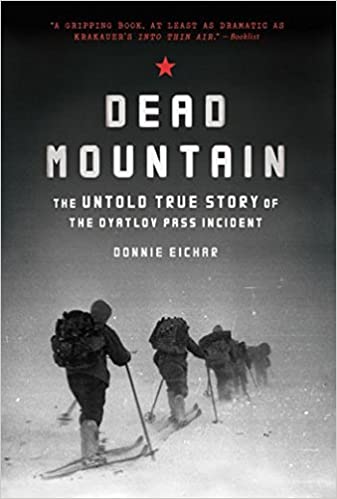 In February 1959, a group of nine experienced hikers in the Russian Ural Mountains died mysteriously on an elevation known as Dead Mountain. Eerie aspects of the incident, unsettling and unexplained causes of death, a strange final photograph taken by one of the hikers and signs of radioactivity, have led to decades of speculation over what really happened. This gripping work of literary nonfiction delves into the mystery through unprecedented access to the hikers’ own journals and photographs, government case files, dozens of interviews and the author’s retracing of the hikers’ fateful journey in the Russian winter. A fascinating portrait of the young hikers and a skilful interweaving of their story and the author’s investigations, here for the first time is the real story of what happened that night on Dead Mountain.

My Rating of ‘Dead Mountain’:

For me, The Dyatlov Pass Incident has been one of the most intriguing unexplained cases that I’ve ever come across. What could be more of a head scratcher than nine experienced hikers, on an expedition to achieve the highest rating a hiker can be awarded, being found dead with unexplained injuries and having cut their way out of their own tent (in temperatures they knew would kill them if exposed for long) and fled into the night wearing very little? In most cases, the hikers had fled barefoot.

Having happened in Russia, there was not much information easily accessible around the time of the incident but, in modern times such things are far easier to delve into. Donny Eichar, the author of this book, essentially gave up most everything in his life at the time (including being away from his wife and new born child) to go to Russia and search for answers, re-creating the Dyatlov hikers’ journey as best he could along the way.

The incident itself happened in the fifties so its easy to view it as a case study with that sense of detachment that you can apply when things of such a tragic nature happen to other people with no bearing on your life. In Dead Mountain, Donny does an excellent job of robbing you of that feeling of disassociation. Throughout the book you see pictures that were taken by the hikers and you read their diary entries leading up to that fateful February night.

In short, the author does a wonderful job of making these kids, along with their hopes, desires and questions about life, a life that, unknown to them, they would never get to experience, feel so very real and close to home. The very first page before diving into the book does an excellent job of that with its quote from the sole survivor, Yuri Yudin, who was forced to turn back early due to medical concerns. The quote reads: “If I could ask God just one question it would be what really happened to my friends that night?” This quote comes directly after a full-page display of the hikers’ pictures and really helps you feel the overwhelming sadness Yuri must have felt.

There are, naturally, as many theories about what happened to the hikers as there are people to give such theories. Some of the more famous include the abominable snowman, abduction and secret weapons tests by the Russian army (this due to the radiation particles found on their clothes), alien abduction/sightings of space craft etc … The only thing that is certain is that something terrified those nine kids to such an extent that they felt running into certain death was far preferable than staying to face it.

Through his modern day recreation of the historical events, Donny Eichar does his best to explore the most likely reasons and debunk/prove them as best as he can. He does this with the aid of people who were closely involved with the case at the time.

Everything that an enthusiast of the Dyatlov Pass Incident could want is in this book. It features as much as is humanly possible of the hikers leading up to their final night, aspects of the case including public outcry after the handling of the events and, in the final chapter after he made his conclusion as to what really happened, the author writes a five or six page recreation of how he views the hikers’ final night to have unfolded. From the moment they took off their boots until the very last breath was drawn.

All in all, Dead Mountain has turned an exciting spectacle into a mystery steeped in sadness that has the potential to touch anyone who reads it. You can’t help but feel a pang of sadness when you read a line in the final diary entry along the lines of ‘I wonder what tomorrow will bring for us’ knowing full well that those poor kids had seen their last sunset. You also can’t help but feel for Yuri Yudin and the survivor’s guilt he must have had to endure until his eventual death some sixty years later.

Dead Mountain is an essential read for anyone with even the slightest interest in the Dyatlov Pass Incident or, indeed, in the unexplained. Can’t recommend it highly enough.

11 thoughts on “Dead Mountain by Donnie Eichar – A Book Review”