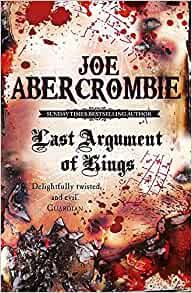 The end is coming.

Logen Ninefingers might only have one more fight in him, but it’s going to be a big one. Battle rages across the North, the King of the Northmen still stands firm and there’s only one man who can top him. His oldest friend and his oldest enemy. It’s time for the Bloody-Nine to come home.

With too many masters and too little time, Superior Glokta is fighting a different kind of war – a secret struggle in which no-one is safe and no-one can be trusted. His days with a sword are far behind him. It’s a good thing blackmail, threats, and torture still work well enough.

Jezal dan Luthar has decided that winning glory is too painful, and turned his back on soldiering for a life with the woman he loves. But love can be painful too, and glory has a nasty habit of creeping up on someone.

While the King of the Union lies on his death bed, the peasants revolt and the nobles scramble to steal his crown. No-one believes that the shadow of war is falling across the very heart of the Union. The First of the Magi has a plan to save the world. But there are risks. There is no risk more terrible, after all, than to break the First Law.

Last Argument of Kings is pretty damn amazing. It’s a fantastic end to a fantastic trilogy that ties so many threads together in ways that, although I may not have liked them all, were brilliant all the same.

I’m glad I’m re-reading this at a time when so much of the First Law world is written and published. I’d hate to be constantly waiting for the next book as Abercrombie’s writing style is far too beautiful to have to wait too long to enjoy. Everything from the way he sets a scene to how he includes background characters, in ways that are so genuine and seemingly effortless, that you can’t help but imagine everything that’s going on as real things in a real place.

His speech is, by far, some of the best I’ve encountered of any author. Speech between characters is far too easy to get wrong and have it feel clunky. Abercrombie does a wonderful job of conveying emotions, general attitude and, all while making it seem natural.

My only gripe would be that be that I’d have liked a little more closure at the end but, considering there are a good deal more books in the series, I feel the open way certain aspects were left were done entirely on purpose.

If you’ve not read the First Law Trilogy and you’re a fan of well-written dark, epic fantasy, you really need to sink your teeth into this wonderful trilogy sooner rather than later. It’s full of deep storylines with wonderful writing and beautifully crafted characters that are far too easy to get familiar with. By the end of it, you just might be left feeling like they’re real folk rather than just names on a page.

The audio book was by far my preferred way of enjoying this trilogy. I read it a good few years ago and decided to embark upon a re-read (listen). Steven Pacey’s narration turns what was a fantastic story into a vibrant one brimming with life, character and emotion. Can’t compliment Pacey highly enough for his work on this.