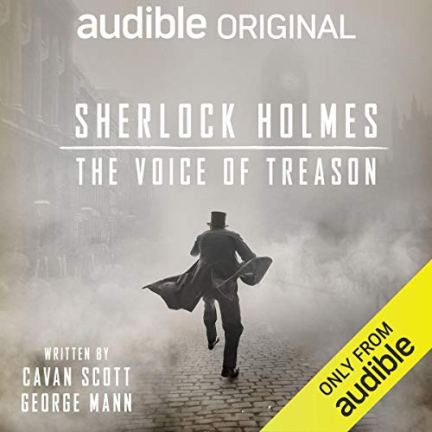 Queen Victoria is missing and the British Empire needs you. Join Holmes and Watson in this gripping Audible Original drama as they battle to rescue the Queen with the help of an unusual ally, arch-nemesis Moriarty.

My Rating of ‘Sherlock Holmes & The Voice of Treason’: 4 out of 5

I’d been meaning to get my hands on this since it came out, being the Holmes fan that I am, and the Audible Daily Deal gave me a gentle reminder. Safe to say, if Audible UK has hands, I bit one of hem off in my speed at getting to this one.

Never in his distinguished career has Holmes, tailed by his faithful companion, Dr John Watson, ever had to deal with a crime of such audacity. The abduction of the Queen of England (from her own bedroom within the palace itself, no less!) It’s the stuff of nightmares for every patriotic man and woman of the Victorian era. But, as any reader of Sherlock Holmes will know, the great detective is the thing that nightmares themselves dream of.

I’ve seen mixed reviews about this but, for my money, it was one of the more enjoyable audio dramas I’ve listened to in a long while. The voice acting was done very well (particularly that of Ivy, loved her accent and the feeling the voice actress put into the work). Because I know what Kobna Holdbrook-Smith looks like, my mental image of John Watson was literally Kobna in a top hat and a nice suit. Not an image I’m unhappy with haha. He made Dr Watson sound slightly older than I would have expected and it oddly seemed to fit quite well.

My only real complaint about this piece is Sherlock’s deductive reasoning. I know, the guy sees the abstract in ways the abstract doesn’t even know exists. His knowledge is freakish and pretty much complete. Which is why it struck me as a bit odd when, even at his own admission, he missed the easier deductions yet picked up on minute details that nobody would ever notice. It felt too shoe-horned in as a plot device rather than Sherlock actually being a bit lax in his deductive faculties.

One thing in particular I thought was handled really well in this was the exploration into the character of Dr Watson. Ordinarily, he doesn’t get a great deal of the lime light in the regular tales, but with this one you get a lot of Watson backstory which really added to the piece. The bits with Moriarty are particularly good as well.

I initially thought that copious amount of flashbacks would ruin it, but they were done really well and actually turned out to be the best way to tell the story. Consider me surprised at having wrote those words as I ordinarily hate flashbacks.

All in all, this was a very enjoyable audio drama with high production value (after having listened to Audible Studios Alien audio dramas I expected nothing less). I’d love to see more Holmes and Watson Audio Dramas in the future.