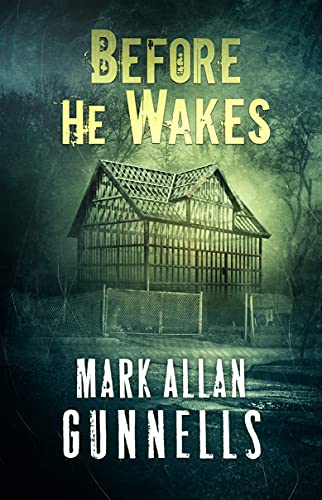 Patrick and Clare wake up trapped in a basement, a thin wall separating their cells. Their captor is mysteriously absent, which at first seems like a blessing. As more time passes with no food or water, they begin to realize a clock is ticking for their survival.

Combining their intelligence and determination, the two begin plotting an escape from their shared prison. Overcoming each obstacle only presents another obstacle standing in the way of their freedom. It will take all of their ingenuity and strength to find their way out of this mess.

They know their captor is still out there, and it is only a matter of time before he returns.

I received a copy of this book in exchange for an honest review.

Before He Wakes tells the tale of two people desperately trying to break out of their abductor’s home whilst he has mysteriously vanished for a period far longer than he usually does. With their food supply dwindling, a break for freedom is now or never.

Mark Allan Gunnells does an excellent job of telling a fast-paced story that keeps you invested and always curious to see how Patrick and Clare fare on their bid for freedom. Just when you think ‘ah, they’ve got it now, surely they can’t run into any other kind of issue’ a completely logical and unexpected issue crops up that gets you right back in thought mode as you rapidly try to think of what they could do in order to get free.

Yea, I actually got so invested at one point that I felt I was there with them trying to get out. So well done on that one MAG 🙂

It doesn’t solely revolve around the unfortunate pair trapped within the strange house. As you would expect, people on the outside are desperately seeking for their loved ones. Clare’s parents embark upon their own mission of finding their daughter, as does Patrick’s boyfriend after the realisation that Patrick hasn’t ghosted him sets in.

It even did something I’m not used to: It had a couple of chapters set before the events of the book every so often and it did them incredibly well. Normally, chapters like that have a good chance of taking you out of the story and ruining the flow, even if they’re well-written. Not only were they well-written, but they served to add to the story in a way that made the amount I felt invested in it seem to grow. So well done again to the author for that one.

As you can probably see, I’ve scored it four out of five. That implies that my high praise has to end somewhere and make way for a slight negative. Here is that negative: The story being told surrounding those outside of the house did not feel complete. It got to a point where things had reached a point where I just knew something big was going to happen to all involved … and then that was it. Never heard from them again. I was left to imagine what might have happened. That was fairly easy in one case, but not in the other. Perhaps an epilogue talking about what happened to them/how they moved on etc … would have added an awesome sense of closure.

I also wasn’t initially thrilled with the ending. But that isn’t something I’d mark the book down for at all as the ending, albeit not the one I typically enjoyed at first, was written very well. Then after a period of reflection, the ending grew on me.

Overall, this was one heck of a fun, fast-paced read. If you want a quick, dark thriller, then this may well be the one for you.