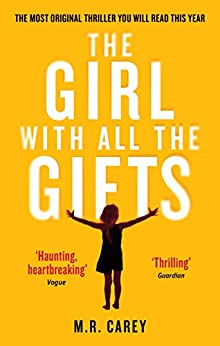 NOT EVERY GIFT IS A BLESSING

Every morning, Melanie waits in her cell to be collected for class. When they come for her, Sergeant Parks keeps his gun pointing at her while two of his people strap her into the wheelchair. She thinks they don’t like her. She jokes that she won’t bite. But they don’t laugh.

Melanie is a very special girl.

Series: The Girl With All The Gifts #1

This is one of those books that, if you go by covers … or by blurbs … chances are you won’t feel overly sold on the idea of buying the book. It gives so little away by either medium that I put myself off from reading it for ages. It wasn’t until I heard a few people talking about it and the general idea of what was going on between the pages that I decided to give it a try.

The basic gist of the storyline is that a parasite (the same one from the videogame series ‘The Last of Us’ if I’m not mistaken) has overcome humanity to the extent where there are only a few small pockets of civilisation left. Add that horrific backdrop to a desperate attempt to flee across country to a much-needed safe zone, and you have some cracking ingredients to make a thrilling novel.

This is one of those books that makes you feel for everyone involved. You want to hate certain people, but you can’t help but think that, rationally, their actions are making so much sense and, to an extent, are incredibly needed. So having a series of characters that you want to love/hate but can’t quite do either with is a nice new experience for me.

I loved everything about the setting but felt that a little more consistency might have aided this one in being a true ‘fight for survival feel’. The general rule is ‘the more built up and area, the more infected people there are’. Which gives you a great feeling of ‘oooh, going in there? This is going to get killy.’ only for that rule to be broken fairly quickly and the infected be somewhat sparse. They are there, but not as much as you’d feel they naturally should be. It almost feels like the author was saving them for specific plot points, which is good, but it came at the expense of my not being able to suspend my disbelief at certain points. For instance; they hunt by sound and motion pretty much. So when certain loud noises are made you’d expect them to come running, or for the characters attitudes to be less cavalier … but it’s not always the case.

That negative point aside, the novel is a fun, fast-paced read filled with plenty of moments that keep you invested in what happens to more than just the main characters. So it’s nice to see the spotlight shared across the whole group rather than just the most obvious one or two. I look forward to picking up the next book in the series (which I believe is a prequel).

I’d highly recommend this to anyone who likes a bit of apocalyptic goodness or anyone who has played and enjoyed the Last of Us video game and wants more parasites in their life.