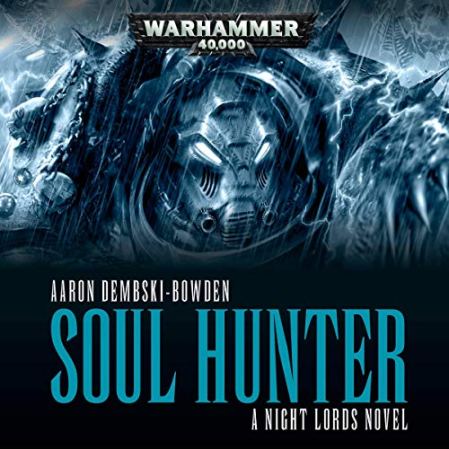 The Night Lords were once among the most potent forces of the Imperium, Space Marines who used fear itself as their weapon. Now, cast adrift from the Emperor’s light and hunted as heretics after their monstrous betrayal, the Night Lords clad themselves in symbols of death and fight the Long War, bringing pain and terror to all who worship the corpse-god of Terra.

A summons from Warmaster Abaddon sends these rebels on a dangerous journey that leads inexorably to a conflict with the Emperor’s chosen warriors, the Blood Angels.

The blurb for this book does two VERY distinct things. It gets you excited for the mouth-watering prospect of a fierce battle between the Night Lords and the Blood Angels … and it totally hides the fact that that aspect of the story is tiny, very late on and that most of what you’ll be reading before you get there is background stuff and numerous time jumps.

None of which is bad, as it all gives a very solid view of who the Night Lords are, how they came to be the legion they are today and all that they have lost. This was published four years after the Horus Heresy series got underway, so I imagine the thought of going back to see how things were in the good old days, way back when they still had their Primarch, was something the author and fans alike got excited to experience. I enjoyed it, I just wish I had some kind of warning that it was going to be that kind of slow-build kind of thing. I think I’d have perhaps enjoyed it more if I weren’t constantly thinking I’d zoned out and somehow missed parts of the story the blurb had led me to believe was happening.

Soul Hunter doesn’t solely feature storytelling from a Space Marine viewpoint. As Bowden has done in other books (Spears of the Emperor for example), he has a human servant viewpoint so us mere mortals can experience the world the Space Marines live in from the eyes of a person who doesn’t fit in that world, rather than from one of the demi-gods themselves just swanning around feeling all big and strong. These parts give a nice layer of info as to how humans, not always wanting to live under the yolk of Chaos, come to be in the service of the traitor legions and their quality of life.

What I liked most about this book was how different to most of the traitor legions the Night Lords seem to be. They are very much a legion that neither loves the Emperor or the Ruinous Powers, but they disagree with one more than the other. They are very deep, which is something you can’t say for a good many of the legions.

All in all, the blurb was a tad sneaky, but the story itself was well worth the read. I feel it has set up what could be one of the more enjoyable series that the Black Library has put out to date.

PS. The rate at which they’re picked off, I’m honestly shocked there’s any left alive after the Horus Heresy!