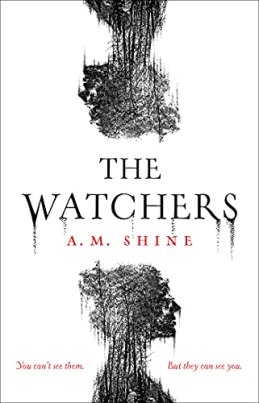 You can’t see them. But they can see you.

This forest isn’t charted on any map. Every car breaks down at its treeline. Mina’s is no different. Left stranded, she is forced into the dark woodland only to find a woman shouting, urging Mina to run to a concrete bunker. As the door slams behind her, the building is besieged by screams.

Mina finds herself in a room with a wall of glass, and an electric light that activates at nightfall, when the Watchers come above ground. These creatures emerge to observe their captive humans and terrible things happen to anyone who doesn’t reach the bunker in time.

Afraid and trapped among strangers, Mina is desperate for answers. Who are the Watchers and why are these creatures keeping them imprisoned, keen to watch their every move?

I know they say you should never judge a book by its cover … but covers are to books what faces are to Tinder (insert your favourite dating app here). They are the bait that draws a hungry set of eyes in. And this cover drew me in hook, line and sinker.

And the story itself was pretty darn good, too.

It wasn’t perfect, as there were a few things with the plot/the odd occurrence here or there that made me think ‘based on the story you’ve been building and the mechanics of how everything works … that simply can’t work. But, as noticeable as they were, I was able to get past those little concerns and truly enjoy this neat little horror novel.

The characters themselves were an enjoyable cast. Despite each one being some kind of outcast or meek personality, they all felt different and it was very easy to distinguish between them. I enjoyed the interactions between them and the relationships formed throughout the novel made me feel like I was reading about real people rather than fictional characters. Mina was a very good lead character and the others provided an excellent supporting cast. I also felt that the situations the characters were put in were vivid enough to have me thinking ‘how the heck would I react if that were happening to me?’

The setting was intriguing. Forests are, by their very nature, wild, untamed and something that quite simply do not belong to mankind. So I loved the premise of this forest, filled with things that no man had ever seen, nor should ever have to encounter, being the end of so many people. In a world where so much of our globe is under mankind’s yolk, it’s nice to imagine a place that isn’t.

I won’t say what creature/s feature in this novel for fear of spoilers, but it’s a good take on them all the same and one I thoroughly enjoyed exploring. I’ve never heard of A. M. Shine before, but I’ll certainly look to try more of the author’s work in the future.

The cold of the forest was just what I needed to chase away the misery of the heatwave we’d been having here in England!