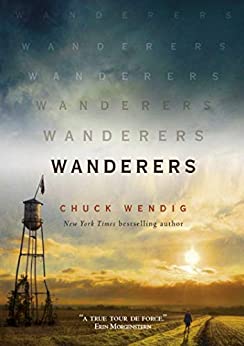 A decadent rock star. A deeply religious radio host. A disgraced scientist. And a teenage girl who may be the world’s last hope. From the mind of Chuck Wendig comes an astonishing tapestry of humanity that Harlan Coben calls “a suspenseful, twisty, satisfying, surprising, thought-provoking epic.”

Shana wakes up one morning to discover her little sister in the grip of a strange malady. She appears to be sleepwalking. She cannot talk and cannot be woken up. And she is heading with inexorable determination to a destination that only she knows. But Shana and her sister are not alone. Soon they are joined by a flock of sleepwalkers from across America, on the same mysterious journey. And, like Shana, there are other “shepherds” who follow the flock to protect their friends and family on the long dark road ahead.

For on their journey, they will discover an America convulsed with terror and violence, where this apocalyptic epidemic proves less dangerous than the fear of it. As the rest of society collapses all around them—and an ultraviolent militia threatens to exterminate them—the fate of the sleepwalkers depends on unraveling the mystery behind the epidemic. The terrifying secret will either tear the nation apart—or bring the survivors together to remake a shattered world.

I saw this a doing the rounds around the time of release and, being a fan of both ‘The Stand’ and ‘Swan Song’ knew that, at some point in time, I’d have to crack open this 800 page beast and walk with the Sleepwalker Flock. It took me a while, but I’m glad I finally did. Shame on me for putting it off for a year or so rather than just diving straight in. For a more in-depth review, check out Drew at The Tattooed Book Geek’s review. He’s the main reason that drove me to pick this chunky tome up in the first place.

Wanderers is an epic tale of the end of the world and the dark depths humanity will sink to when that eventuality comes to pass. Set in America, a country where guns are plentiful, the end of the world was always going to be a violent one when paranoia and illness came for mankind. And violent it was. If you want a slow-burn tale of mankind’s fall and hopeful salvation, Wanderers is the book for you.

It starts off with a single sleepwalker. and slowly, but surely, builds to a whole flock of seemingly unharmable men and women sleepwalking their way across America to a destination only they know. Nothing can wake them, attempts to restrain them ends fatally … and incredibly messily. The only thing to do is to walk with them and try to care for them as best as possible.

As with anything that is totally unexplainable, there are two sides to the argument. One being to investigate and aid, the other being to destroy for the fear of what this new phenomenon might represent. Chuck Wendig does a wonderful job of getting into the mindset of people on both sides of that coin and a variety of people that sit in-between. I wasn’t sure what I would be in for as, in all fairness, people sleepwalking across America isn’t the sort of thing you’d think could be strung along for the best part of a thousand pages, but I was bitterly disappointed that ended when it did. It was one of those books that was just so enjoyable that it could have continued forever and I’d have not complained.

The characters focussed on mainly are Doctor Benjamin Ray, a black doctor walking his way with the flock through a hostile America. Shana Stewart, an angsty teenager and sister of the original sleepwalker. Pete Corley, an in-the-closet rock star on a journey of self-discovery. And Matthew Bird, a simple pastor who is practically weaponised to stir up the wasp nest that is America on the brink of pure terror at the sleepwalker phenomenon. All in all, it gives an excellent cast of diverse characters from various backgrounds that meshes into one heck of a compelling narrative.

My slight flaws with this were character-based and, although I feel Chuck did an excellent job with creating a bad guy you can’t help but hate more than Joffrey from Game of Thrones, I do feel his main antagonist had somewhat of an over-the-top villain feel to him in places. I also felt the motivations of Shana’s father were … pretty lacking. He felt like more of a non-entity than anything. That being said, it wasn’t a negative that detracted enough to alter my score or inhibit my enjoyment at all.

When reading this I thought ‘this has the characters, the depth of story, the constant need to know more … essentially it has everything to make a wonderful TV show and, after a quick google search it looks like it has been optioned for a show. So I look forward to seeing that and can only hope the screen adaptation does the novel justice.

9 thoughts on “Wanderers by Chuck Wendig – A Book Review”